Before retiring from active politics, Hon. Bitamazire served as the Minister for Education and also Women Member of Parliament for Mpigi while Hon. Gabriel Opio served in various ministerial capacities including Gender, Finance and Education.

Bitamazire is currently the Chancellor Uganda Management Institute while Opio runs a private nursery and primary school in Kansanga.
Hon. Mutuuzo said the visits were symbolic of the Women’s month and particularly the International Women’s Day, which was marked under the global theme: “Women in leadership: Achieving an Equal Future in a COVID-19 World”.

“We can’t talk about women in leadership and not talk about icons like Hon. Geraldine Namirembe Bitamazire and Hon. Gabriel Opio for having set the pace, diligently served and impacted many Ugandan lives” Mutuuzo said.

She noted that the education sector was still building on the foundation that was set by Hon. Bitamazire including the rolling out of the Universal Primary Education (UPE) among others.

She added that Hon. Opio had also laid the ground while at the Gender Ministry and the subsequent ministers, including herself, were glad to build on his groundwork.

Mutuuzo revealed that despite being invited, the two former Ministers and the immediate past Minister for Gender, Labour and Social Development, Hon. Janat Mukwaya had missed last week’s scientific national Women’s Day celebrations held at State House in Entebbe and it was her role to look them up to share gratitude with them.

“I thought I should look you up and extend our appreciation for the service you offered the country and let you know that you are forever our icons in terms of women in leadership,” Mutuuzo noted.

Hon. Bitamazire, who turns 80 in July, applauded the gesture and called on women in leadership positions to reach out to those at the grassroots and uplift them.

“It’s critical that all women in leadership positions go back to the villages and render a hand that will uplift the other vulnerable women,” She emphasized, adding that “No one should be left behind. This will give valuable meaning to women in leadership.”

On his part, Hon. Opio called for co-existence among women and men, girls and boys for the advancement of society. He appreciated the key role that women play in leadership and appealed to more women to take up the challenge.

The month of March is celebrated as a Women’s month and various activities are conducted to honour women’s contribution to development. 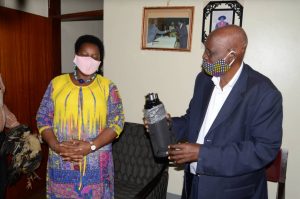 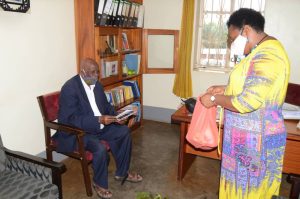